Dale Nottestad “got the monkey off his back” as they say, scoring the victory in the 108-lap Big 8 Series Late Model Series event during the 54th annual National Short Track Championships at the Rockford Speedway Saturday night.

Nottestad, the 41-year old driver from Cambridge, Wis., wheeled his Glass Works of Madison/Take A Chance Construction/Smithback Farms/Fast Signs-sponsored Pathfinder Chassis Chevrolet SS to the victory at the high-banked, quarter-mile. 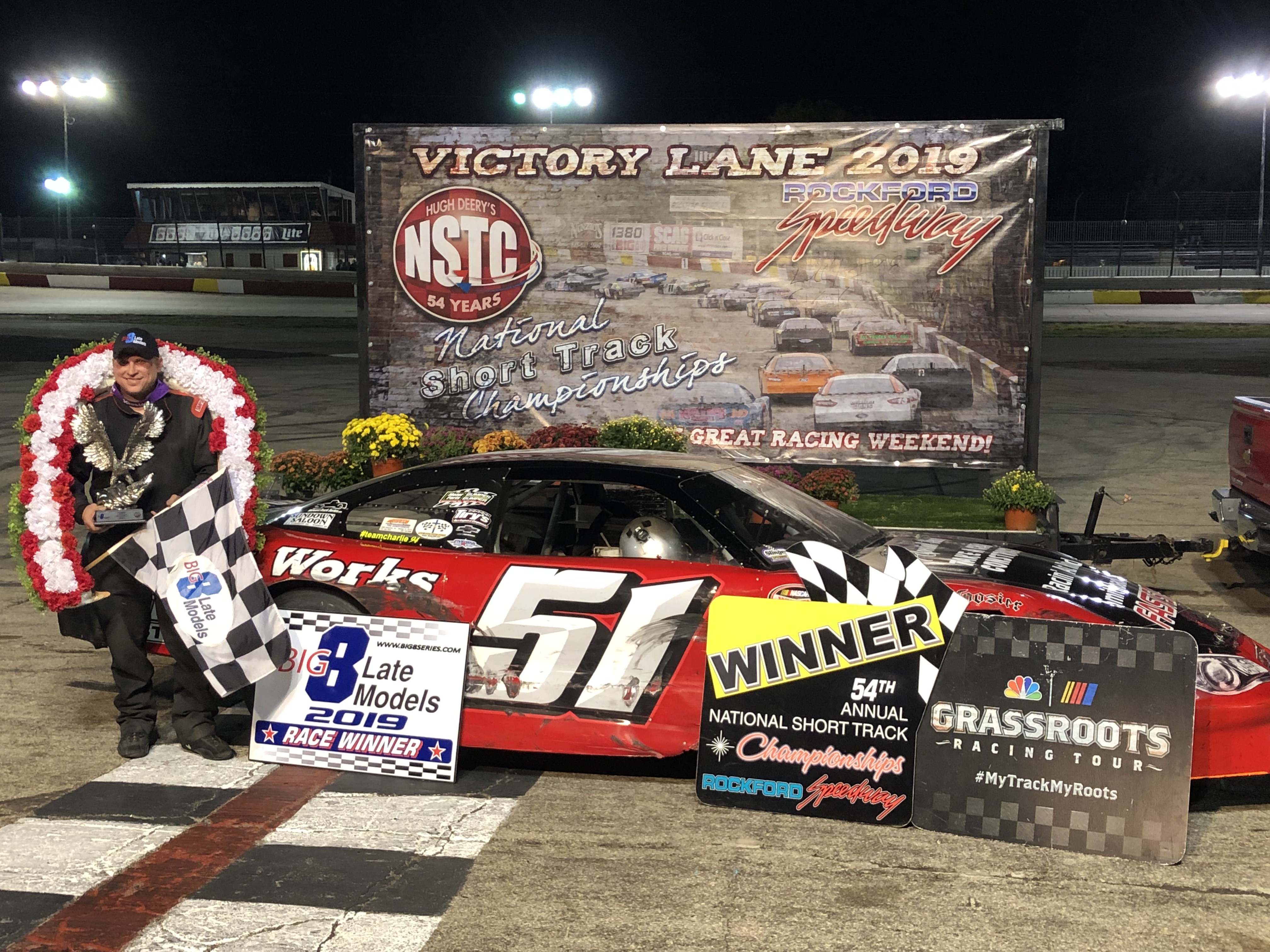 Starting seventh in the 22-car field, Nottestad, the race leader from about the 36th lap, stayed out front in a race that was slowed by 10 caution flags and raced to the checkered flag with a slim lead over veteran Tom Gille. Austin Nason, Brody Willett and series points
leader and three-time Big 8 champion Michael Bilderback rounded out the top five.

In the past, Nottestad has been oh-so-close to a Big 8 victory during Rockford’s annual NSTC. Nottestad, a five-time champion at Wisconsin’s Jefferson Speedway, had finished in the “top three” five times in the last six years at Rockford without a win.

The day’s third fastest qualifier, Nottestad became the first driver to be a repeat series winner in 2019 as he had previously won at Madison (WI) International Speedway back in June.

Tom Berens started the 108 lap race from the pole and led the first few circuits with Jon Reynolds Jr. moving to the front shortly after. Reynolds, a two-time Rockford late model champion as well as a four-time winner of the Big 8 Series event at NSTC, led the way until Nottestad came up to challenge and eventually grabbed the lead. Reynolds’ night ended with mechanical ills at about the halfway mark.

Nottestad seemed to be able to race away from the rest of the field during green flag runs only to see the yellow flag fly – four within the last 26 laps. Nottestad held on to the top spot with Gille making a run for the lead on the last lap.

“I was just driving and trying to hit my marks,” said Nottestad. “My spotter kept telling me that they (Tom Gille and Austin Nason) were battling pretty hard back there. I just wanted to make sure I hit my marks there (on the last lap). I kinda got in there too easy in the corner and got loose off of (turn) two. I knew I could drive off and beat him (Gille) to the line. The car was strong all night. It neverfell off.”

“It took about four laps for my car to really take off,” Gille said. “The yellow at the end (with 15 laps to go) just killed us. If we would have had maybe three more laps, I think we could have made it real interesting. I think we were the quickest car since about lap 80 on. I just ran out of laps.”