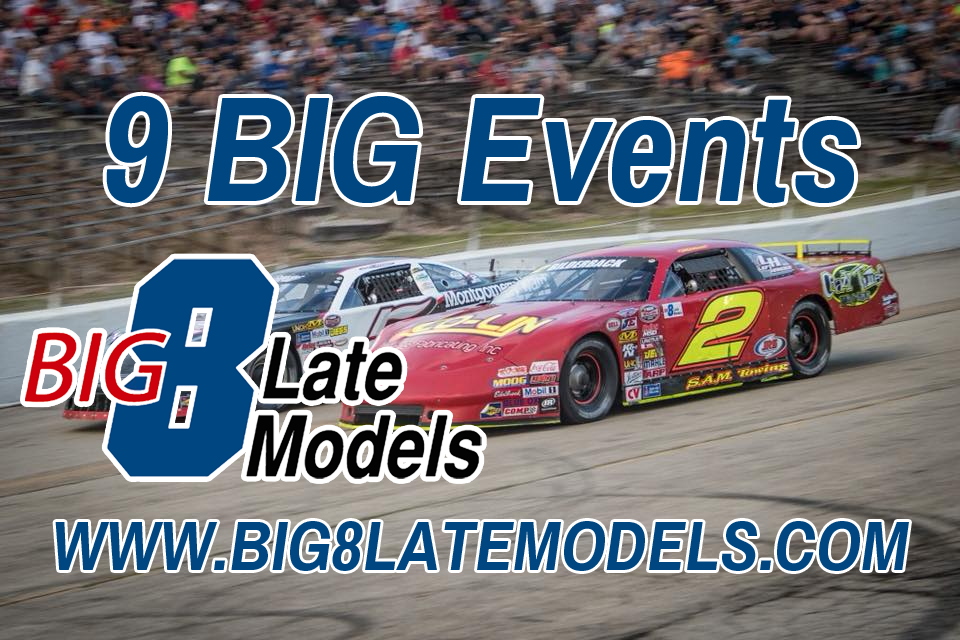 Since the series began in late 2004, the Series has taken part in some of the most well-known racing events held annually at some of the most prestigious short tracks in America. This year is no exception.

The Big 8 Late Model Series will begin its sixteenth season Saturday, April 18th at Rockford Speedway as part of the 43rd Annual Spring Classic. The “Best Weekly Warriors in the Country” will go head to head for the 88-lap feature event. The Mid-American Stock Car Series will also be on tap for the 43rd Spring Classic. Being that the event has been washed out the last couple years, a rain date has been set for Sunday, April 19th.

Following the Spring Classic, the Big 8 Series makes the return to the Slinger Super Speedway, for the 73rd season opener at the “World’s Fastest Quarter-Mile Oval” on Sunday, April 26th. The last event at the speedway, running in 2014, Austin Nason scored his first career series win while in a head to head battle to the checkered flag with Casey Johnson. This year’s event will be highlighted by an 88 lap Big 8 feature event as well as being joined by the Modifieds, Legends, Bandoleros, and American Super Cups.

Five weeks later, the Series will travel west to the state of Iowa, for the “Clash at the Downs” at Hawkeye Downs Speedway in Cedar Rapids, IA on Friday, May 29th. This will be the Series’ 6th visit to the speedway, with no repeat winners.

One month after the Hawkeye Downs event, the Series will make its second stop of the year to Rockford Speedway for the Star Spangled 76 on Saturday, July 4th. This event will feature both the Stars of the Big 8 Late Model Series and the ‘Weekly Warriors’ of the NASCAR Whelen All-American Series going head to head in a combined points event.

Three weeks after the Rockford event, the Big 8 Late Model Series travels north to State Park Speedway to headline the opening night of the Larry Detjens Memorial Weekend. The unique oval near Wausau has provided the setting for some of the closest and most exciting Big 8 races over the past several years and has become a favorite stop on the tour for both fans and drivers alike.

Seven weeks later, the “three races in three weeks” stretch to crown the champion for the 2020 Season begins at Elko Speedway on Saturday night September 26th. In 2020, the Big 8 Late Model Series is the headlining division of the 12th Annual ‘Thunderstruck 93’ at the competitive bullring located one-half hour south of the Twin Cities in Elko New Market, Minnesota.

An always-anticipated event on each year’s schedule takes place one week later at Rockford Speedway on “Short Track Saturday Night” (October 3rd) as part of the 55th running of the National Short Track Championship. Rockford’s famed ‘high banks’ provide the setting for the grueling event which tests the skills and patience of the Big 8’s best while also testing the endurance of each man and machine.

Finally, on Saturday, October 10th, the 2020 Big 8 Series champion will be crowned at the La Crosse Fairgrounds Speedway in West Salem as part of the massive 51st Annual Oktoberfest Race Weekend. Big 8 racers from across the Midwest converge yearly on Oktoberfest to try and earn ‘the toughest ticket in town’ among as many as 60 competitors while gunning for victory in the championship feature at “Fest.”

For more information on the Big 8 Late Model Series, please visit our website at big8latemodels.com or call 815-633-1500.