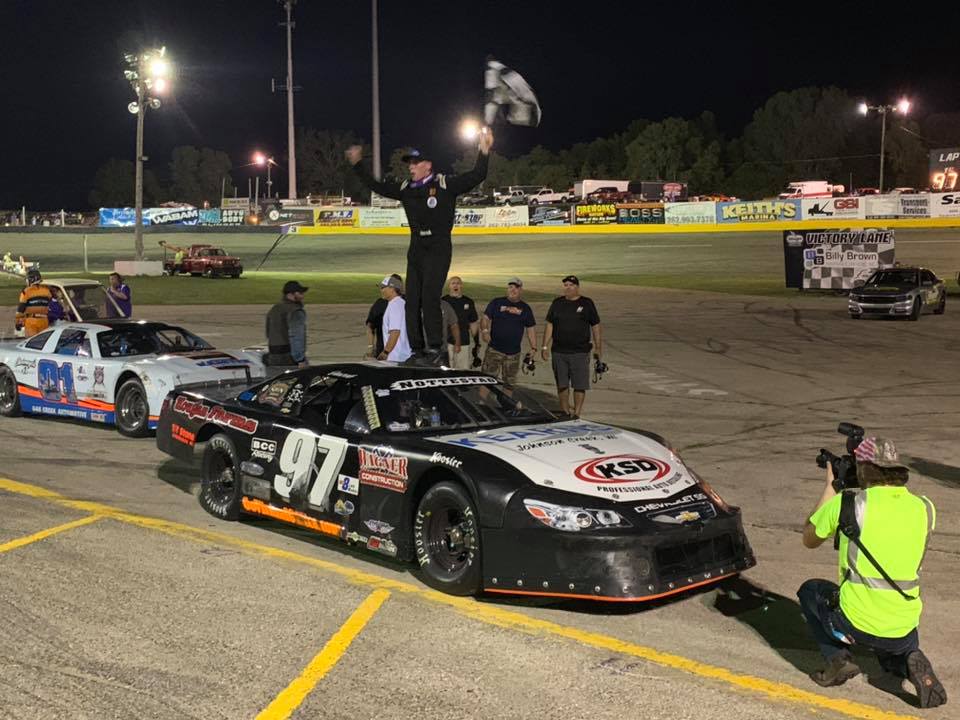 The Big 8 Late Model Series returned to Slinger Super Speedway for the first time since 2014 for their second race in two nights to kick off the 2020 season.  After a wild race at Rockford Speedway Saturday night, things calmed down just a little bit for 88 laps around the high-banked quarter-mile to kick off Slinger Nationals festivities.

Defending Slinger Late Model track champion Jacob Nottestad scored one for the locals with his first-career Big 8 win.  After making adjustments at the halfway break, the Cambridge, Wisconsin driver made his presence known in the final run to the checkered, passing Slinger favorites Ryan Gutknecht and Nick Egan and pulling away late for his second win at Slinger this season.

“I started 13th and qualified second.  We got unlucky on the qualifying, somebody put brake fluid all over the track.  We marched to the front and got to third by the halfway break,” Nottestad told Speed51.  “The crew made a hell of a change on the pit stop and we were able to get the 01 (Gutknecht) and the 13 (Egan) on the outside and we set sail from there.”

Although Sunday night’s race was cleaner than Saturday’s season opener at Rockford, Sunday’s event did see its share of mayhem.  The biggest incident of the night happened on a lap 21 restart, when a multi-car incident took out Danny Church, Jr., Zach Prunty, Tom Gille, Tom Jasinski and Phillip Wuesthoff, with Prunty and Gille having wheels leave the asphalt in the wreck. All drivers were able to climb out of their cars on their own.

For Nottestad, the win comes in his 10th start with the series, where he had a previous best finish of fifth at Madison International Speedway in 2018.  After several close calls in Big 8 competition, he is now able to check one off the list.

“It feels awesome, this one’s been on my bucket list for a while, just to win a Big 8 race anywhere. I’ve come up short a few times and now it’s pretty awesome to win in dominating fashion.”

Gutknecht and Egan rounded out the podium, with fast qualifier and Saturday night winner Max Kahler and Jerry Mueller rounding out the top five.