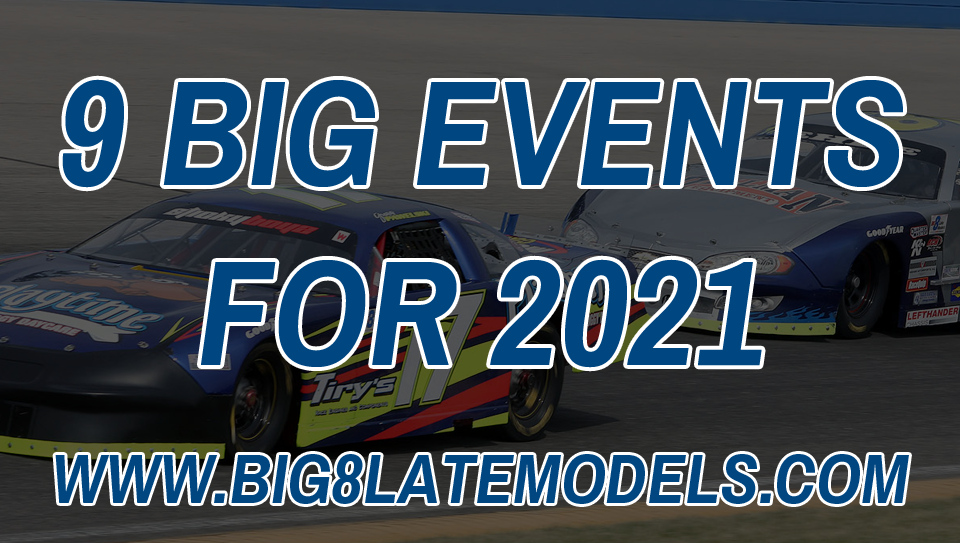 Loves Park, IL – The 2021 season is finally among us! Big 8 Late Model Series officials have announced the 2021 schedule of events, which includes nine BIG dates across seven different racing facilities across the Midwest.

Since the series’ inception in late 2004, the Big 8 Late Models have taken part in some of the most well-known racing events held annually as some of the most prestigious short tracks in America. Again, this year is no exception.

The 17th season for the Big 8 Late Model Series will begin on Saturday, April 17th at Rockford Speedway as part of the 43rd Annual Spring Classic. The famed high banks always provide exciting racing and test the skills of each driver. This will be the first of 3 events at the historic facility.

Following the season opener at Rockford Speedway, the Big 8 Series returns to Slinger Super Speedway for the 74th Season Opener at the “World’s Fastest Quarter-Mile Oval” on Sunday, April 25th. This will be the series’ 5th stop to the historic track located in Slinger, Wisconsin. Last year, as part of the “Prelude to the Nationals” Jacob Nottestad, 2nd in the 2020 point standings, picked up the win in the 88-lap feature event.

Six weeks later, the Series will make their return to the state of Iowa after a 1-year hiatus after severe storms damaged the facility. The “Clash at the Downs” at Hawkeye Downs Speedway in Cedar Rapids, Iowa will take place on June 4th. This will be the series’ 6th visit to the speedway, with no repeat winners.

One month after the visit to Hawkeye Downs Speedway, the series will make its second stop of the year to Rockford Speedway for the Star-Spangled 76 on Saturday, July 3rd. This event will feature both the Stars of the Big 8 Late Models Series and the ‘Weekly Warriors’ of the NASCAR Advanced Auto Parts Weekly Series going head-to-head in a combined points event.

Three weeks after the event at Rockford Speedway, the Big 8 Late Model Series travels to Northern Wisconsin to State Park Speedway on Friday night July 23rd. The series will headline the opening night of the Larry Detjens Memorial Weekend. The unique oval proves for some of the closest and most exciting Big 8 races over the past several years and has become a favorite stop on the tour for both fans and drivers alike.

One week later, the Big 8 Late Models make their return to Wisconsin’s Fastest Half-Mile for the Racers Reunion 48 at Madison International Speedway on Friday, July 30th. The famed Speedway in Oregon, Wisconsin always provides exciting short-track racing. This year’s event will be joined by the 602 Late Models, HSRA, and the Upper Midwest Vintage Racing Series.

One month later the stars of the Big 8 Late Model Series make their return to the famed Milwaukee Mile at Wisconsin State Fair Park in West Allis, Wisconsin for the Milwaukee Big 8 38. It has been 8 years since the series has been at the historic track, which started hosting stock car races in 1903. This year, the Big 8 Late Model Series joins the ARCA Menards Series for the first time ever on a Sunday afternoon event on the 29th of August. The last visit for the series in 2013 boasted 48 cars starting the feature event.

The final part of the season takes us to a 2-week sprint to crown the 2021 champion where the series makes its third trip to Rockford Speedway for the famed 56th running of the National Short Track Championships. Rockford’s famed ‘high banks’ provide the setting for this grueling event which tests the skills and patients of the Big 8’s best while also testing the endurance of each man and machine for this event.

Finally, on Saturday, October 9th, the 2021 Big 8 Series champion will be crowned at the La Crosse Fairgrounds Speedway in West Salem, Wisconsin as part of the massive 52nd Annual Oktoberfest Race Weekend. Big 8 racers from across the Midwest converge yearly on Oktoberfest to try and earn ‘toughest ticket in town’ among as many as 60 comptetitors while gunning for victory in the championship feature at “Fest.”

For more information on the Big 8 Late Models Series, please visit our website at big8latemodels.com or call us at 815-633-1500.