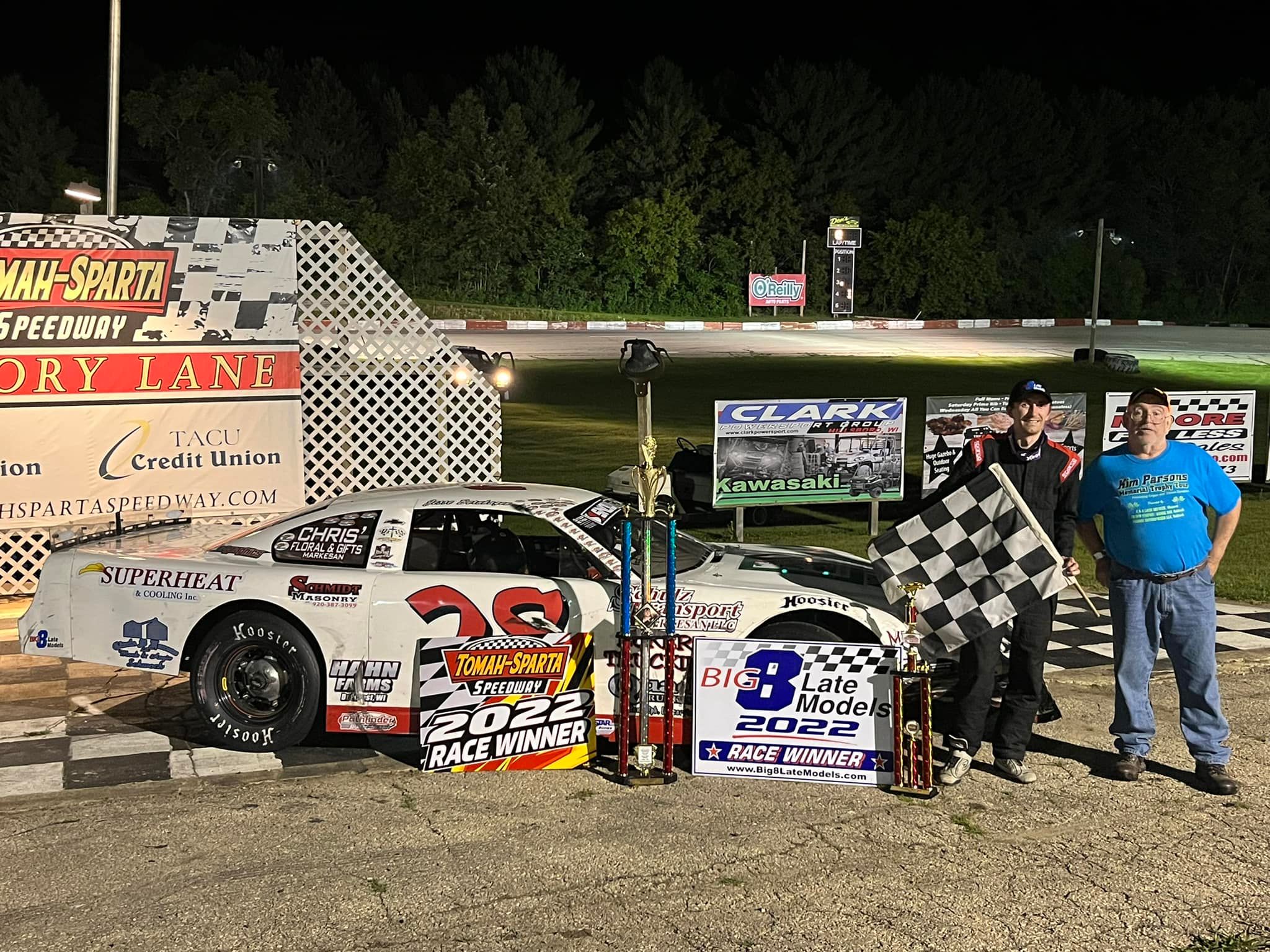 With more laps than any of his competitors at Tomah-Sparta Speedway, Jesse Bernhagen was certainly an odds-on favorite to win on Friday night’s inaugural Big 8 Late Model Series event at tricky 3/8 mile.

However, victory along the Big 8 Late Model Series had been in the grasps of the Willard Wisconsin resident before.

Nine times previously, Berhagen had finished in the top five in Big 8 Series events. Sooner or later, it seemed, Bernhagen would have his time in victory lane with “The Best Weekly Warriors in the Country.”

That time came Friday night, as the 2012 Big 8 Rookie of the Year battled back from early-race misfortune and went from the back to the front of the 19-car starting field, taking the lead with 13 laps to go en route to his first career Big 8 Series win.

The 58-lap race got off to an exceptionally slow start, with five caution flags in the first eight laps of the race. One of those yellows was for Bernhagen, who got tied up with Randy Sargent in a lap 1 dust up. While Berhagen went to the back, Iowa driver Kody King led the field back to green. The teenager King, who sat on the pole, lead the first two laps and held off challenges on three different restarts before he was overtaken by Brent Edmunds for the race lead. Edmunds then paced the field over the course of the race’s next 23 laps, while feeling constant pressure from eleventh place starter Will Rece.

As the race began to find a rhythm, Edmunds and Rece began to pull away and wrestle for the race lead. While Edmunds led, the yellow flag flew four more times, with each restart giving Edmunds just enough breathing room between himself and the rest of the field.

Rece eventually made the move on Edmunds to take the lead just three laps shy of halfway. Meanwhile, as Rece took over the lead, Bernhagen reemerged as a contender picking off positions on each restart while shrewdly using the outside line. After the race’s final yellow flag flew on lap 31, Bernhagen got his chance at the race lead. Over the course of the next 14 laps, Bernhagen dueled with Rece for the lead, finally sticking his foot in the door and storming to the head of the class on lap 45.

Bernhagen was able to keep Rece and third place Dale Nottestad at bay over the race’s final paces on the way to his first ever Series win. Rece held on for second, his best run to date with the Big 8 Series. Nottestad, the evening’s Fast Qualifier, settled for third. Jerry Mueller, who started the race from the 14th position, climbed through the pack and finished the race in fourth place. Early-leader Edmunds persevered on his way to a fifth-place finish.

Next up for the Big 8 Late Model Series is the traditional stop at State Park Speedway in Wausau Wisconsin, with a 58-lap feature set to highlight the first evening of the Larry Detjens Memorial Weekend on Friday July 22.