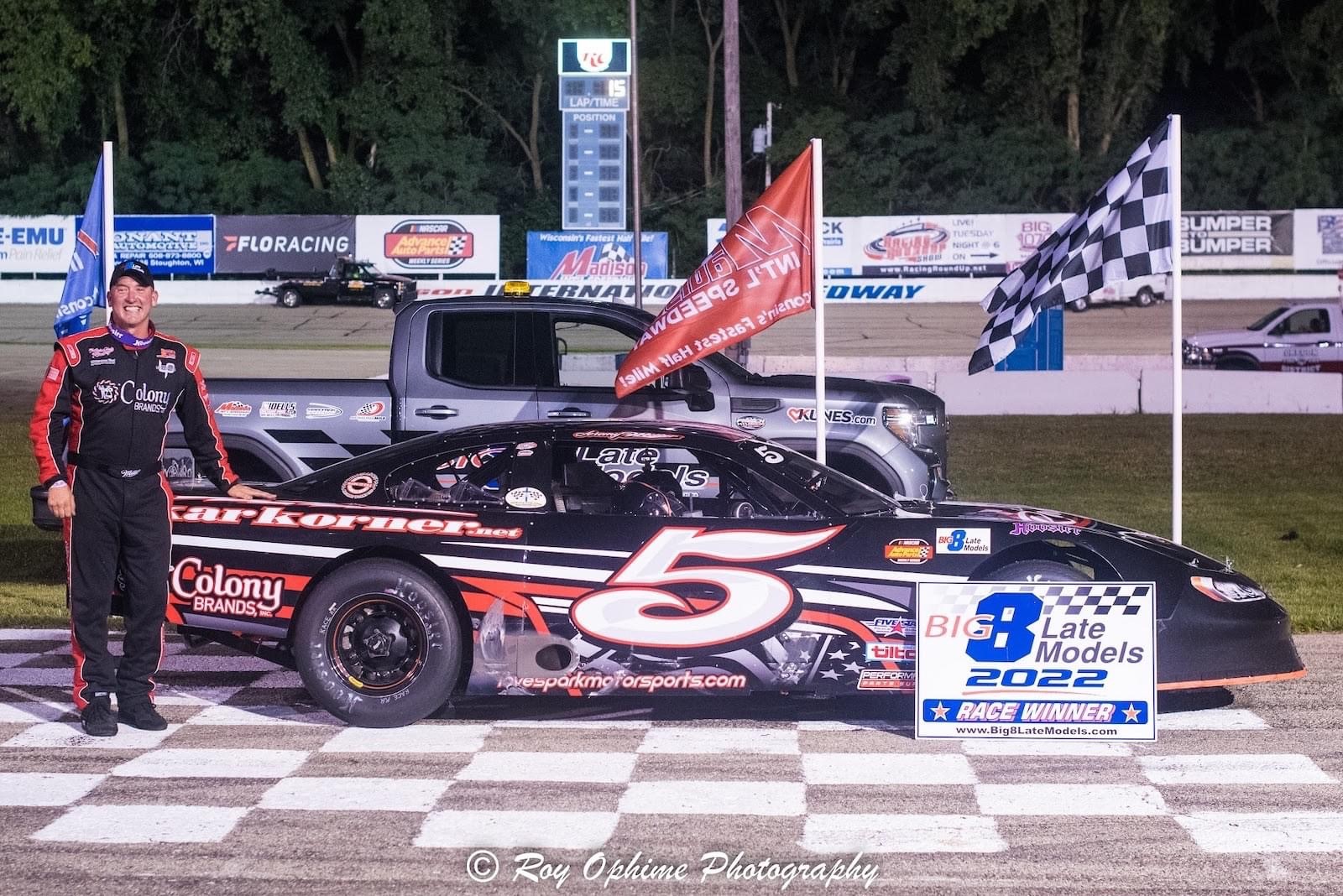 Jeremy Miller won the 48 lap feature for the Big 8 Late Models, It was his fifth Big 8 win at Madison going back to 2006. It was also his 18th career Late Model win at Madison.

The 22nd Big 8 race at Madison was brought to the green flag by Brent Edmunds and Franc Beldowski. The pair raced side by side for the first three laps with Beldowski finally able to get a slight advantage before a spin behind them brought out the caution flag.

Beldowski led the field back to the green flag followed by Edmunds and Shaun Scheel. He was able to open up a six car length lead followed by Edmunds, Will Rece, Michael Bilderback, and Shaun Scheel. On lap 9 Jeremy Miller broke into the top five while one lap later Rece and Bilderback moved up to second and third. Jeff Holmgren Jr. moved into fifth on lap 11 with Dale Nottestad into sixth.

On lap 16 Will Rece worked to the inside of Beldowski coming out of turn two to take the lead with Bilderback and Miller also getting by Beldowski. Nottestad worked his way into the top five on lap 18. At the half-way mark Rece was running strong out front as he had built up a three car length lead over Bilderback.

Things got very interesting on lap 26 when a car spun just ahead of Rece as he was coming out of turn three. Rece was able to move to the high side of the track to avoid making contact as the caution flag came out.

Rece brought the field back to green with Bilderback and Miller side by side behind him. Rece was able to increase his lead up to six car lengths while Miller and Bilderback were fighting it out for second. On lap 27 Bilderback and Jeff Holmgren Jr. made contact on the front stretch with Holmgren Jr. hitting the wall and bringing out another caution flag. Holmgren Jr. was able to stay on the track while Bilderback made a quick trip to the pits before returning.

Once again, Rece would lead the field back to the green flag while the three cars behind him at the time of the caution all chose to line up on the inside which allowed Shaun Scheel was able to move up to the outside of the second row next to Miller. When the green flag waved, Rece continued to lead with Miller in second and Nottestad and Shaun Scheel racing for third. Rece and Miller pulled away from the pack with Miller showing he had more speed as he took the lead on lap 31. Jon Reynolds Jr. passed Nottestad for third on lap 34 but had a lot of ground to cover in order to catch the top two who were pulling away from the field.

Out front Miller’s lead over Rece was increasing and time was quickly running out on the rest of the field as the race stayed green the rest of the way as Miller was able to hold off Rece to pick up the win. Following the top two were Reynolds Jr., Nottestad, and Shaun Scheel.

“The car was perfect all night. We tightened some things up after the heat races which was definitely the right call,” said Miller. “I’ve had a lot of good teachers, and I’ve been a pretty good student here over the years.”

Fastest in qualifying was Jeremy Miller with a lap of 18.577 (96.894 mph). Heat winners were Brent Edmunds, Shaun Scheel, and Jerry Mueller.