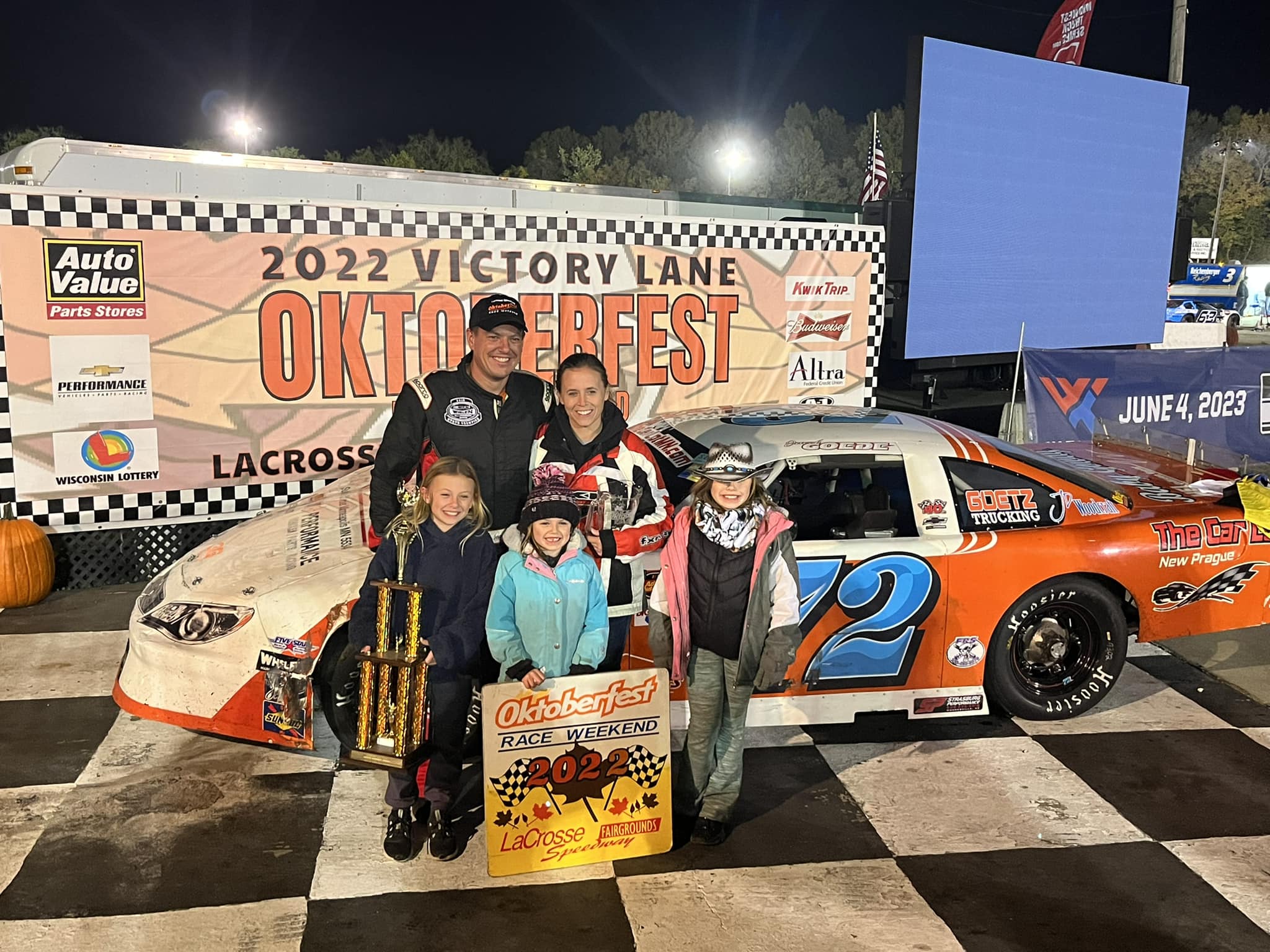 The winds finally blew the clouds out of the Coulee Region to give us a picture perfect sunny day for ‘Championship Saturday’ during the 53rd Oktoberfest Race Weekend at the LaCrosse Speedway. Despite there being a little nip in the air still, the racing action on the big track was still as hot and competitive as the previous two nights.  Throw in drivers seeking their first ever championships or looking to make history with multiple titles and you have the makings for a memorable night of racing.  Jacob Goede captured the win for a third straight year in the Big 8 Late Model feature, while Dale Nttestad had a mechanical issue with his own car but managed to finish in a backup car to win his first Big 8 title.

Grant Brown (Prior Lake, MN) and Ryan Kamish (Farmington, MN) charged by Ryan Varner (MInnetonka, MN) to show the way at the start of the 38 lap Big 8 Late Model feature.  Kamish would follow closely behind Brown for the first half of the race as he attempted to find a way into the lead.  Bryan Wrolstad (Faribault, MN) spun out in turn two on lap eight to bring out the lone caution period.  Kamish went right back to work challenging Brown for the race lead, but as they approached the halfway mark Jacob Goede (Carver, MN) would put the pressure on the lead duo.  Two laps after halfway Goede powered under Kamish to claim the runner-up spot.  Goede stuck to the low line to power under Brown to settle into the lead with 14 laps remaining.  For much of the last 14 laps Goede would have a mirror full of Steve Bachman (Bangor, WI), but Goede pulled away over the final few laps to win the Big 8 for the third year in a row.  Borrowing the car of Adam Oxborough (Montgomery, MN) after suffering an issue in his qualifying race, Dale Nottestad (Cambridge, WI) brought it home in one piece to capture his first career Big 8 championship.

In the 25 lap Mid-Am Racing Series feature, Steve Blair (Brownsburg, IN) shot by Nathan Borchardt (Prior Lake, MN) to lead the way.  Blair would build up a sizable lead only to have Jim Cormack (Plover, WI) eat up the deficit.  With ten laps remaining Cormack powered by Blair on the outside to take over the race lead.  Rick Redig-Tackman (Waukesha, WI) bounced off the front straight wall after losing a right front tire with five laps to go.  Dan Gilster (West Salem, WI) and Blair also suffered flat tires as well, but everyone was able to replace their flat and return to competition.  Clay Curts took advantage of his runner-up spot on the restart and powered around Cormack with four laps to go to move into the lead.  Curts would pull await over the final few laps to score the biggest win of his career.  A mechanical issue with six laps to go forced Ron Vandermier, Jr. (Sheridan, IL) to slow his pace.  He managed to bring the car home in one piece to lock up his first consecutive championship and tie the record for most series championships by James Swan (Lake Geneva, WI).

Jake Halterman took the lead at the start of the 20 lap Midwest Dash Series feature. After a yellow flag for Merek Pankow (Jefferson, WI) tagging the turn one wall, Mark English (Edgerton, WI) shot past Halterman to settle into the lead.  The hard charging Karter Stark (Marshall, WI)shot past English on lap five to become the new leader of the race.  The championship duo would soon make their presence known to the field.  Phil Malouf (Manitowish Waters, WI) powered by Stark to settle into the lead lap nine while Scott Ciesielski (Amherst, WI) charged by Stark to settle into second a lap later.  For the second half of the race Ciesielski would be in hot pursuit of Malouf as they battled over the race win and the series championship.    Ciesielski tried a few times to power around Malouf on the outside, but Malouf got a better run coming out of turn two.  Malouf would keep Ciesielski at bay over the closing laps to claim another Oktoberfest checkered flag win and would drive away with another series championship.

The 25 lap Midwest Truck Series feature saw pole sitter Danielle Behn (Waupaca, WI) drive out to an early lead.(Midwest Truck Series feature. As the rest of the field tried to sort itself out, Behn was quickly opening up a huge lead on the field.  James Swan got his left side wheels on the grass down the back straight on lap 11, but Swan was able to gather things together and get his truck back on the tracks.  After the halfway mark, Ty Majeski (Seymour, WI) began to make his presence known to the front of the field.  Driving a brand new Toby Race Track #001, Majeski moved into second with six laps left as he slowly began to eat up the distance between himself and Behn.  A late yellow came out with two laps remaining for a spinningDillon Schwanbeck (Poynette, WI).  Majeski wasted little time in getting around Behn down the back straight for the number one position.  Majeski would christen the new Toby Race Truck chassis with its first ever victory.

Matthew Henderson would be the final car to turn a lap time in ARCA Midwest Tour qualifying and he would race up to the top of the board with a fast lap time of 18.714 seconds.  After receiving his ‘Faster Than a Speeding Bullet’ trophy, Henderson was first to be offered the Ultimate Challenge bonus of at least $7,600.  If he accepted, he would start last in the 200 lap main event on Sunday to win it.  After Henderson turned it down, second fastest qualifier Ty Majeski did accept the Ultimate Challenge bonus.  Jeff Storm built up a huge lead over Dan Fredrickson to win the Odd Dash, while Dean Cornelius fought back the challenges of Cole Butcher to win the Even Dash.  Tristan Swanson got by racelong leader Griffin McGrath on the last lap to win the qualifying race.  All 28 cards in attendance will start the big 200 lap feature on Sunday including Jonathan Eilen who was in the process of installing his third different engine of the weekend into his racecar.

The 53rd Annual Oktoberfest Race Weekend will feature an exciting conclusion on Sunday, October 9.  The ARCA Midwest Tour will go out with a bang with their big 200 lap season finale feature to decide the Oktoberest Champion and wrap up the battle for the 2022 ARCA Midwest Tour Championship.  The Gandrud Chevrolet Cratetoberfest 602 Challenge features all sorts of cars from Late Models to Modifieds and even the Midwest Trucks using 602 motors.  The real drama will happen when the drawing takes place for a brand new 602 crate motor, and we have witnessed plenty of drama in the first three years of the event. The Upper Midwest Vintage Racing Series will take up back in time to the fabulous heyday of racing, and you may even witness a famous driver from the past compete.  Gates open at 8, qualifying for the Cratetoberfest 602 goes on the clock at 10, the Autograph Session starts at 10:45 and the final racing action of the year goes green at high Noon.

For more information about the LaCrosse Speedway or the 2022 schedule of events, call the track office at 608-786-1525 or visit our web site at lacrossespeedway.com.  For more information about the 53rd Annual Oktoberfest Race Weekend, check out oktoberfestraceweekend.com.  LaCrosse Speedway is proud to be a NASCAR Hometrack, part of the NASCAR Advance Auto Parts Weekly Series.